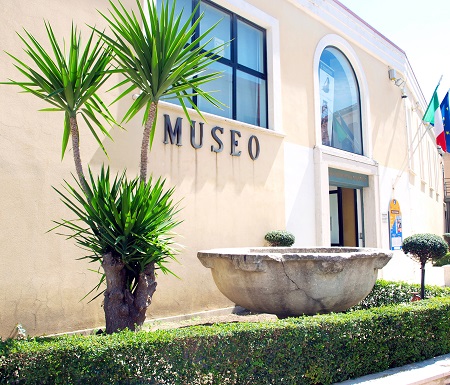 The National Archaeological Museum of Crotone, open to the public since 1968, is amongst the most important of Calabria. The building, designed by architect Franco Minissi, is located at one of the bastions of the sixteenth century city wall, near the Castle of Charles V, in the historical heart of the town.In his most recent exhibition, inaugurated in 2000, the Museum offers an exhibition itinerary, on two floors with spacious open plan rooms.

On the ground floor, the visitor is guided in chronological order to discover the main historical stages of the ancient Greek city of Kroton, starting from the reports that it had with the existing indigenous communities until late antiquity. The site of the colony, founded by Greeks from Achaia (region in the north of the Peloponnesus), according to ancient literary sources, it was shown to Miscello by Pythia in person, the priestess of the temple of Apollo at Delphi. After all, the binding of Kroton with Delphi is confirmed by the presence of the main attribute of the priestess, the tripod Apollonian, right on the coins of Crotone. But it is above all the material evidence to show how the literary information about the Hellenic presence in this part of Calabria since the last quarter of the eighth century B.C. is reliable. After a particularly prosperous period between the seventh and sixth centuries B.C., the city had a new impetus in the second half of the sixth century B.C., when the philosopher Pythagoras arrived from the Greek island of Samos, with the founding of his school and the contribution of his teachings, he would have overturned the Crotonian society on all levels with the result of permanently transforming the history of the same Magna Graecia.

A further section of the ground floor is dedicated to an in depth analysis of urban archeology, essential activity carried out on the territory by the Archeology Authority, which since the 70’s of the twentieth century, has been able to build a more reliable and detailed picture of the ancient topography of the polis. To this is accompanied a section dedicated to the necropolis in the village of Carrara, where are present some of the many equips of this burial ground which was in use between the end of the eighth and the middle of the fourth century B.C. The second floor instead offers an overview of the sanctuaries identified in Crotone. Among the main ones, that one in Vigna Nuova location, certainly destined to the cult of Hera in her capacity as the liberating goddess, given the presence of a large number of strains of bronze chains dedicated to the goddess as a votive offered by freed slaves. Still the goddess Hera, this time venerated as Lacinia, is the protagonist in the sanctuary dedicated to her at Capo Colonna with the important remains found inside a small building, probably intended for thesaurus function (Building for the custody of precious offers). Among others, the Golden Diadem and a fascinating and mysterious neuralgic boat made of bronze stand out for their beauty. The second floor is also dedicated to illustrate some of the known settlements in the territory (Krimissa, Petelia, Makalla) that helped tie the ancient Greek city to mythical traditions and local cults or to cults influenced by contacts with the Greek ideologies (Sirens, Philoctetes, Apollo Alaios): first the Pythagorean doctrines, of which archaeology over time is trying to provide some fleeting, but concrete, evidence. Director Gregorio Aversa

The museum displays materials from the Neolithic period, such as stone axes and obsidian scrapers from Petilia Policastro; of exceptional importance are the fragments of Minoan-Mycenaean pottery (TE I- II/TM IA) from Capo Piccolo, an important Bronze Age settlement discovered in 1977 and then investigated by Domenico Marino; also in the prehistoric section, but from the Iron Age are the pitchers with a bulgy spout, and fibulae of various shapes and rare instruments, found in the tombs of Cirò. Of great importance are the two axes with raised edges (one of them with a fine geometric decoration, engraved with a burin, is considered "unique") of the ancient Bronze Age from the Timpone delle Rose Roccabernarda/Petilia Policastro and some closets, datable to the late bronze age and the iron age, of axes and bronze artifacts (some finds are "unique") by Cirò and from the territory south of Crotone.

The Greek times are documented through many finds. From the Archaic period Corinthian ointment pots and various ceramic fragments were found, fragments of red pottery vases with black figures, of a chalchidian pottery, etc. Other ceramics come from various centres of Lucania, by the Apulia and Etruria. There are also various prehistoric and early historic materials found in Crotone, such as antefix archaic with Gorgon's head, a clay head of a young man, a small altar with Heracles fighting with the Centaurs, various votive reliefs, ceramic artifacts include a red figure, a oscillum and bronzes symbolizing Hercules in assault wearing the lion skin (381). A boundary stone, number "29", is written in greek, while two tips of bronze spear, most likely trophies, are inscripted with "Anthropos son of Theognis" and "son of Aeschylus Echesteneto". From the city of Crotone comes a relief of a votive nature, carved on a marble slab of Naxos, depicting probably the goddess Hera in conversation with another female figure, a minor divinity or perhaps the personification of the city itself. It dates back to 450-420 B.C. However, some studies have questioned the hypothesis of a votive relief that, according to Elena Lattanzi, has no counterpart in the ancient greek world. Also to classical times it is attributable a marble acrolith (mutilated in the face) in which we recognize the goddess Athena, founded during excavations in the mid-70s of the twentieth century in the modern city. An entire section is dedicated to the finds from the sanctuary of Hera at Capo Colonna: between numerous votive objects, fragments of architectural decorations in marble and terracotta and fragments of sculptures. The fragment of a cup in over painted black figures (VI century B.C.), with two bearded characters, armed with spears, with turban headdresses , addressed to the sides of a monumental tripod (from Capo Colonna, the escarpment to the east of Temple A) stands out.

From the so called area “Cimino Quote”, on the promontory of Capo Colonna, comes a beautiful pentelic marble head (mutilated at the face), in which we can well recognize Apollo citaredo, dating to 350-300 B.C. The find, of considerable interest, was found in the 70’s of XX century from the Krotoniate Archaeological Group. Exposed you can also find the "treasure of Hera", found in building B from the Heraion and including, among other things, a golden diadem, a pendant from the belt of domestic production and neuralgic lamp in the form of a small boat, unfortunately incomplete. Since November 2009, it houses the only askos bronze in the shape of a Siren (V century B.C.), coming from Murgie of Strongoli, returned by the Getty Museum in Malibu (USA), and the other askos bronze of the sixth century B.C., also in the form of a Siren, from the southern chora of Kroton. Worldwide there are only three known specimens, of these, two are preserved in Crotone.

Among the Roman remains are two large marble basins, from the shipwrecked cargo of marble in Punta Scifo (known as the Paolo Orsi wreck, discovered by the crotonian Antonio Tricoli), and a base of an honorary statue, with an inscription, which was found during the construction of the church San Giuseppe, in the city centre. Two other marble bases, with inscriptions published in the C.I.L. (Corpus Inscriptionum Latinarum), found in the historical centre of Crotone near the Castle, have been brought in the provincial Museum of Catanzaro, where they are exhibited. In the museum since 2012, the small, but extremely interesting, Egyptian stele of Horus on the crocodiles it has been housed. This stele, found in Crotone, returned, after 35 years from The Civic Museum of Milan that had bought it at the antiquities market. Other sections document the other local shrines: the one called Sant’ Anna in the locality of Manche in Vozza (Cutro), on the river head of the Esaro, the one of Apollo Aleo in Krimisa (Punta Alice in Cirò Marina), the Doric temple of Caulonia and a worship area in Punta Stilo. Finds from the Middle Ages, from Crotone, are exposed in the room called “Caserma Sottocampana” (the former Royal Civic Museum of Crotone), in the castle of Charles V, which is also owned by the state and supervised by the Authority in charge of the Archaeological Heritage of Calabria.